As you may recall, all our spare roosters in the pen had the name ‘Soup’. Someone even asked me why once… well, let’s just say they have all recently lived up to their common name. I raised them from chicks from back in August 2012, and they ended up each being around 4.5 kilos (10 lbs) each (plucked/drawn), which is pretty darned big for a chicken. The photo above was taken a while ago – they grew a fair amount more after that was taken.

In trying to recognise the sensitivities of the general readership, I decided not to show the various stages of dispatching, plucking and preparing the end product. Needless to say, I do it all myself, as does any other person living this sort of life, with the last three ‘done’ back in mid-December. The chook house and pen is now home to the not-so-little chicks I featured a while back – at least I got my greenhouse back as a result!

So, as the birds were some 27 months old, they were considered quite ‘old’, although in reality the older birds are far more tasty in fact. I therefore didn’t just opt to roast them on dispatch day – partly coz they were probably too fat to fit in our oven – instead I decided to just go for usable chunks of meat… 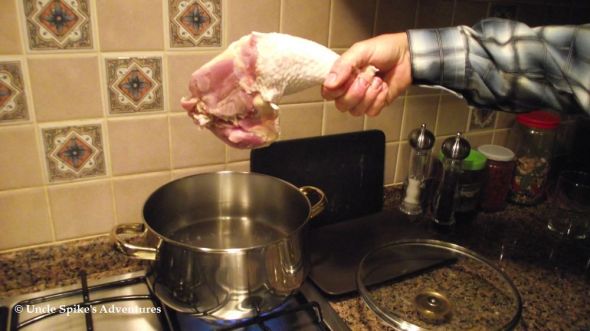 In order to soften up the potentially tough or sinewy meat, I cut each bird into simple rough-cut breast pieces, rather large whole thigh and leg chunks (see above), and the wings. All that lot then went into a large washing-up bowl full of heavily pre-salted water, and placed in the fridge for 48 hours. This has the effect of tenderizing older meat. Once ‘done’, I simply bagged it all up and chucked them into one of the freezers. As you can see, even from just the last three birds, this is what we had – quite a haul! 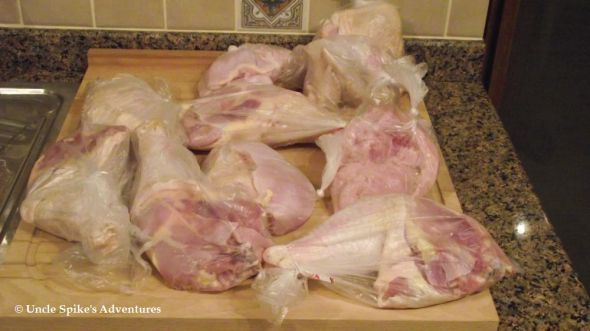 Once all the decent meat was harvested, I really didn’t bother trying to spend time remove too much more – I’m no expert with a carving knife I can assure you. So instead, out came the largest pots and the still quite meaty carcasses were boiled up for yet another rather sumptuous chicken and veg soup – with ALL home-grown produce of course. Once cooled off, the bones were picked clean, tons of veg added and some THIRTY bags of soup were also added to the freezer.

Finally, all the non-used bits and pieces were brewed up, added to the bones, then frozen down in bags to feed our Bonzo  – providing him with four days food per chook – one happy doggy 🙂

14 thoughts on “Them Chooks Named ‘Soup’”