Yay… still not quite sure what the chuff I did getting into this lark, but this old camel is now a third of the way through the “30 Day Ab Challenge”. Well I say that, but in reality it’s just been one week and two hours, but as I decided to dump the rest days, that’s 8 exercise days completed, and therefore just over a third of the 23 exercise days in the 30 day challenge 😀

First of all, the rest days… they are optional I guess, and some of my fellow Facebook Group victims have taken them, and some haven’t. For me, I need to lose 3 days off the plan anyway; as I really need to kick this challenge by 26 June, leaving one day free before Challenge II, the 16 hour fasts of the month of Ramadan 🙂

So for those who didn’t believe I could do this (err, me included), here’s a run-down of progress to date:

These are a killer, but is the exercise during which you can really feel the good being done. My first attempts were a hilarious attempt to portray the antics of a tortoise on its back, lags and arms flailing around helplessly. But then I took some advice and now tuck my toes under the bed, and arc my arms from straight behind my head over to my feet. The continuous movement and gentle momentum makes it bearable, even if I sound like a Grizzly bear on heat in doing so. I generally stop every 15 or 20 reps, just for 5 seconds, but so far, so good.

This is a simple exercise, has not a great deal of movement, but it certainly can be felt! Started off with 5 at first (they were hard), but now up to 50. I’m ok with this one, the least torturous one 🙂

My nemesis. I do the old ‘tuck hands under bum’ bit, which does really help, but this is a killer for me, and I struggle with it. However, stopping every 10-15 reps for a few seconds, and placing a pillow under where my feet hit have helped (it was that last/first 5cm or 2″ to the floor that were hurting the most). The other ‘feature’ I have, and maybe it’s a ‘bloke thing’, is that my legs will not go fully straight when nearing vertical. But apart from that, I dread this one every morning. I know I could opt for the single leg raise, then swap to the other, but I refuse to be beaten by this. 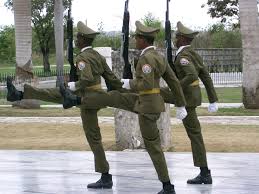 This looks so simple, by by ‘eck it’s a challenge all right. All you have to do is keep as straight as a plank, and stare at the bedside clock placed on the floor, in the vain hope the seconds will speed up to a more acceptable rate – alas.

So there you have it, that’s a third done and dusted, but looking at the numbers over the next week, I’m not so certain I can keep it going, but what do they say……?