In this house we have a short being among us, more famously known as Cousin Spike Jnr. Now regular followers will know plenty about said kiddo; he even has his own category on this blog, and if he could find a way, I’m sure he would get WordPress to hive off his ‘own followers’ from my list on to his own list!

Anyway, Cousin Spike Jnr has FOUR GOLDEN RULES that he lives by,
and the rest of us Muggles have to follow just to fit in…

1 – “He with the shortest arm starves”… Don’t expect any ‘service’ around here, coz we’re not famous for it 🙂 So from age 3.7 onwards, Cousin Spike Jnr has been getting his own breakfast and clears up afterwards – he learned quickly. Occasionally he’ll come find us to ask if we want something too – he’ll make a better parent than either of us no doubt 😀

2 – Reality music shows… I know, pretty crass, but that’s the general entertainment during feeding times at the Spike table (be it at the kitchen table in spring/autumn, the dining room in winter, or out on the balcony in summer). Cousin Spike Jnr knows all the programmes, the rules, and the judges for a number of X-Factor shows (UK/US/NZ/AU), The Voice (US) and the Got Talent series (UK/NZ/AU)…!

3 – Star Wars… If you don’t know anything about Star Wars, then Cousin Spike Jnr might not even let you enter his domain. Everything, and I mean everything is related back to Star Wars, from his choice of tv, to games, to his toys, even his underwear! 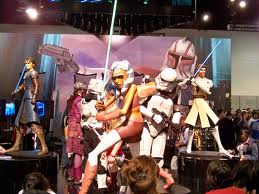 4 – Blondes… Cousin Spike Jnr has a ‘thing about blondes’. Of course, growing up in southern Turkey does not quite fulfil his daily requirements for blondness, hence his TV idols of Britney, Kylie, Shakira and Christina Aguilera feature in his dreams on a regular basis (with no guidance or influence from Uncle Spike, I might add!).

I wish I had been that cool at his age!