Not all days start with a smile 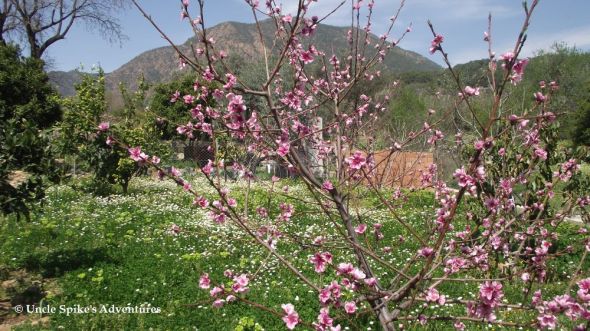 Here’s a lovely bright springtime picture from here on the farm. Unfortunately my day wasn’t quite the same.

Talk about lessons learned… late yesterday afternoon, I was out and about and due to pick up young sir from the school bus at 1730. It was rather soggy, and so I took the rash decision to re-gas the old car at another time. Fool.

0730 this morning and we were driving through the village enroute to the school bus pickup point a few km away, when lo and behold, the gas tank decided to teach me a belated lesson. Oh flippin’ yay. As it runs on LPG, when it runs out, you get like 20 seconds warning, that’s it (apart from, that is, the little red light on the cheap aftermarket LPG tank meter screwed to the dashboard that I so hastily ignored to my peril).

So, I managed to limp the car to past the mosque like some demented Renault kangaroo c.1988. Then I had to resort to the starter motor and 1st gear to propel the vehicle up and over the irrigation water channel. After that it was ‘almost flat’, and so I started my morning exercises pushing the car along, while kiddo sat up front and steered us past the potholes, chickens, tethered goats and other village motoring hazards.

Eventually I passed where the short guy from the mosque with the wobbly left leg lives. He wasn’t there, but even so, apart from moral encouragement, I doubt his pushing abilities would have matched his enthusiasm (he’s always a happy chappie who never misses a cheery wave). Then the mother of the young ‘pink’ girl stopped (dunno the girl’s name, but she’s always dressed like a pink marshmallow). The mother was modelling equally stylish fluffy blue jim-jams, driving a pope-mobile type car stuffed full of five to seven year olds. In the vain hope of our small person reaching the bus on time (yeah right), she slotted him into a spare cubic centimeter of back seat space and set off. I resumed my lonesome exercise regime.

Shortly after that, ‘tomato man’ turned up, having seen me from his huge greenhouse where he was working on planting out new crop seedlings. With two of us pushing, the world suddenly seemed a tad brighter. We parted company some time later once I reached the slow hill, and relaxed as I free-wheeled off into the mist, waving ‘thanks’ out the window.

The school bus had already gone on its merry way five minutes beforehand; a fact discovered as I met up with a dejected kiddo sat by the roadside; a young man (8) facing a day without learning – his worst nightmare. Plus not seeing his ‘gal’ probably added to his woes, and therefore mine too. With a couple of hundred metres to the gas station (slightly uphill of course), we set off, both pushing, resting, pushing, and resting again.

Once the gas station was within sight, I beeped the horn five times, and the guys from the station came running down the road to meet us, and very soon afterwards, we were able to refill the tank. What a prat I felt. Kiddo agreed I think, albeit in polite yet supportive silence.

So, how to get the kid to school, some 35km away, in an old car I knew wouldn’t make the hills? Having filled up, we headed to the bus station so we could both get the two buses required for the journey there, and me back again on the next service.

Boogar… wallet empty – arrgghh! Another lesson to be learnt!

Lateral thinking time. Faced with another drive to get to the one ATM around here, that may or not be working…. I headed to the guy with the fruit and veg stall we deal with. He gladly gave us some cash, and then beamed the way someone does when dawned upon by a great idea – “Take the veg truck Spike!”

So off we went, Tired but heading in the right direction. Just over an hour late for school as it happened, so not so bad. But what’s that great saying? “There’s no cure for stoopid”.

The day didn’t improve much either. Oh well, we reset to zero tomorrow 🙂

24 thoughts on “Not all days start with a smile”