Talking of bread the other day, well the other culprit known to challenge the elasticity of my old leather belt is the humble Simit. Found mainly in Turkey, but also in parts of Greece, Bulgaria, Macedonia, Serbia, and Albania, the simit is probably the most popular snack going here.

It varies in both size, taste and texture as you travel around the country and the southern slavic states, but generally it’s made from a simple dough of flour, water, yeast and salt, we then use molasses to stick on the sesame seeds. As well as from bakeries, simits are available at many local shops, or from street stands like this next image.

In the cities you can buy them from outside your front door even, especially first thing in the morning, from guys who wander the streets with a tray stacked high with simits on their head, calling out “S i i – m i i t” at the top of their lungs for much of the day. If it’s cold and foggy in mid-winter, it’s quite an eerie sound on the deserted streets early of a Sunday morning.

Calorifically speaking, it’s a killer of course, equating I believe to something like one loaf of fresh oven-baked bread. So for me, an occasional treat these days 🙂 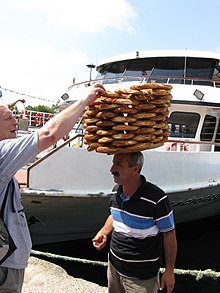