And there went summer…

Basically, our weather here has two elements, sun or storms. After five straight months of sun, we have finally moved into the next phase… the ‘non-summer’, or as most places call it, autumn and winter.

Whilst electrical storms are a huge feature of the non-summer months, we generally have zero rain from 10th May until 20th Sept… Yes, it’s strange to quote dates, but year upon year these dates seem to hold true, and guess what, this year was no exception (almost).

Yesterday was September 19th, and having seen virtually no clouds, we suddenly spotted a few… then there was a gentle rumble of thunder. Normally we have occasional thunder roll around the mountains for 10 days or so as summer gets ready to pass the baton on to autumn with a big ‘first storm’ of the seasonal changeover. Well, not this year: within ten minutes of the first quiet rumble, we faced a full-on electrical storm!

Yes, plenty of superb lightning, with even a couple of direct ground strikes on the mountainsides just 200m from us that exploded like a large bomb detonating in the way that it resounded around the mountains!

Cousin Spike Junior had a good science lesson too; with zero noticeable time delay between visible lightening strikes and the ‘explosions’ (more accurate than to call it merely thunder)! 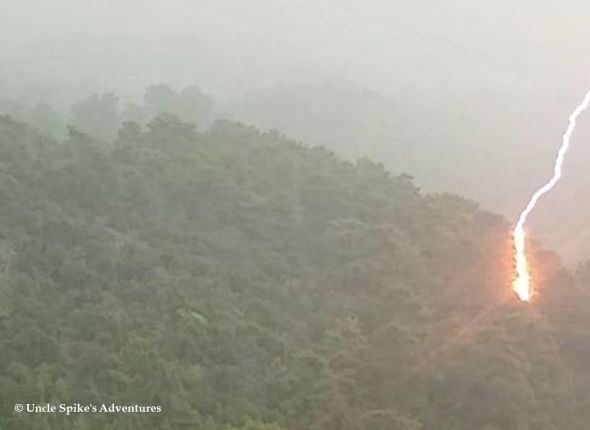 And click here to hear the sound it made – LOVE IT !

15 thoughts on “And there went summer…”