Olive trees need a particular style of care which is altogether different to the fruit trees we have on the farm. Olive trees will grow for many years – I’ve seen some over 500 years old for example. Most of ours are 40-100 years old I guess.

Olive trees are prone to a number of diseases, as all trees are, and often whole branches will die off, and if the trees are not kept in check, the disease can spread and soon kill off a whole tree. However, they are very resilient trees, and regenerate prolifically if tended annually.

They all generate base shoots like mad, and these have to be removed, else they sap the strength. Occasionally I’ll let a shoot grow to replace a diseased limb, but mostly that isn’t viable. Most olive trees are usually grafted onto wild olive rootstocks, so unless a shoot comes off ‘above’ the graft point, the new branch will be wild and won’t bear any fruit. The leaves of the wild tree are darker, narrower and shinier, as seen below. 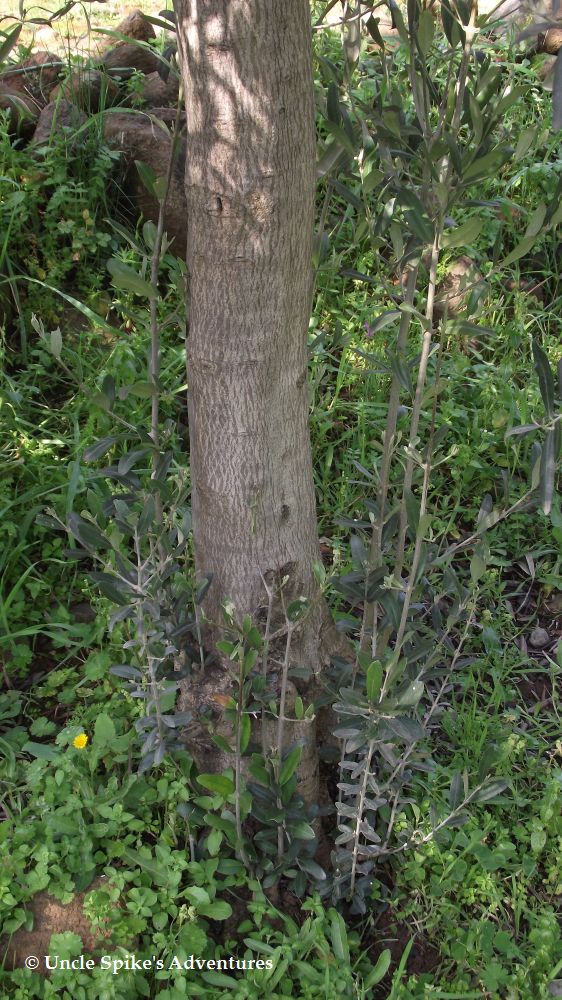 The main treatment is again copper sulphate, which I have found can even cure tree cancer when applied two or three times during the dry season (rather than the normal winter spraying regime).

For the most part, it’s just a case of managing the growth. Left to their own devices, the trees grow very tall, and the centre dries out, so only the shoulder areas yield olives. These trees below have never been pruned, and the result are pretty much unmanageable trees. 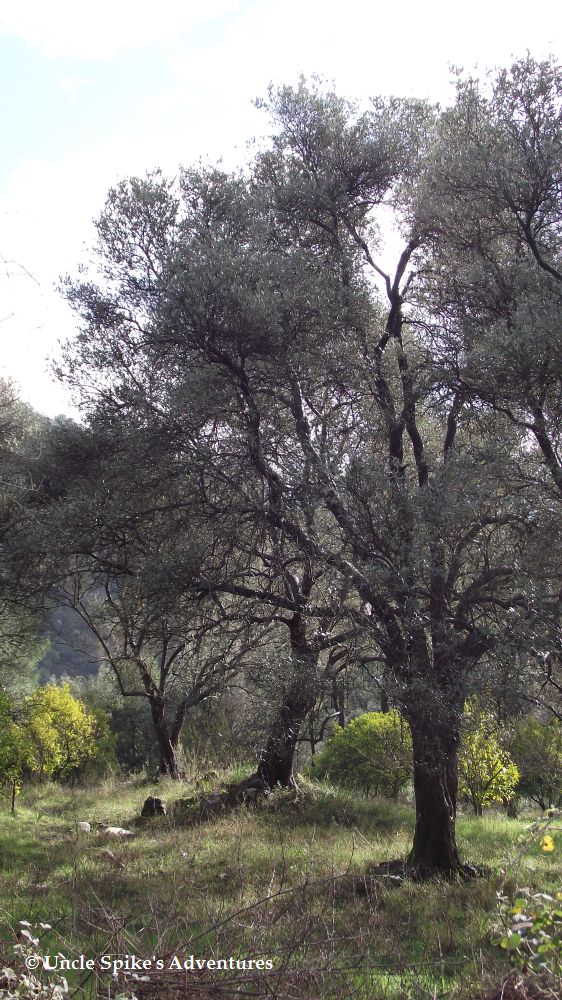 You can see here how ‘full’ the branches can become, so much so that the inner core starts to die off due to a lack of light reaching the leaves. 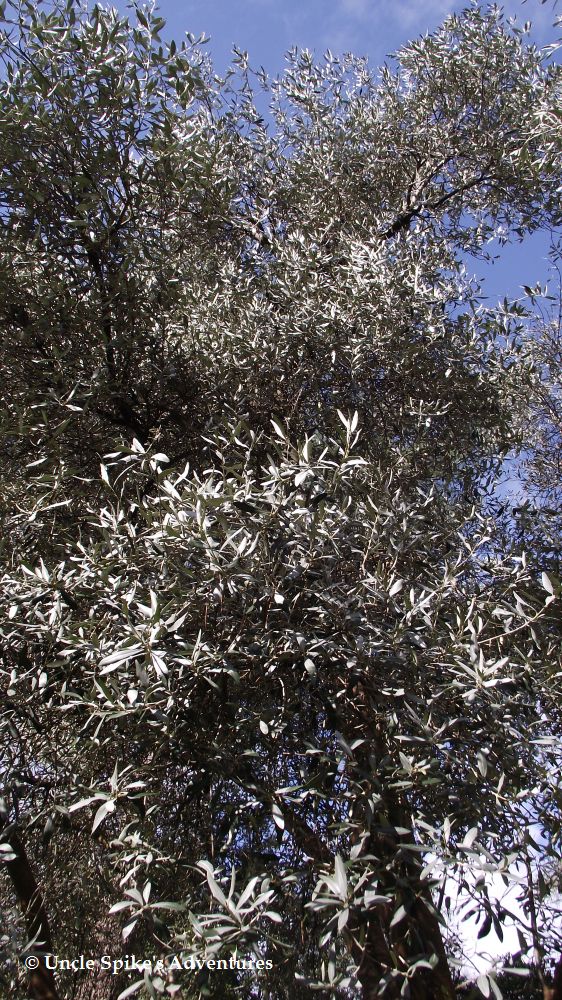 So my problem is keeping the fruit generating branches closer to ground level. This next tree had reached over seven metres (22 ft) and this year went on my target list for regenerative pruning. 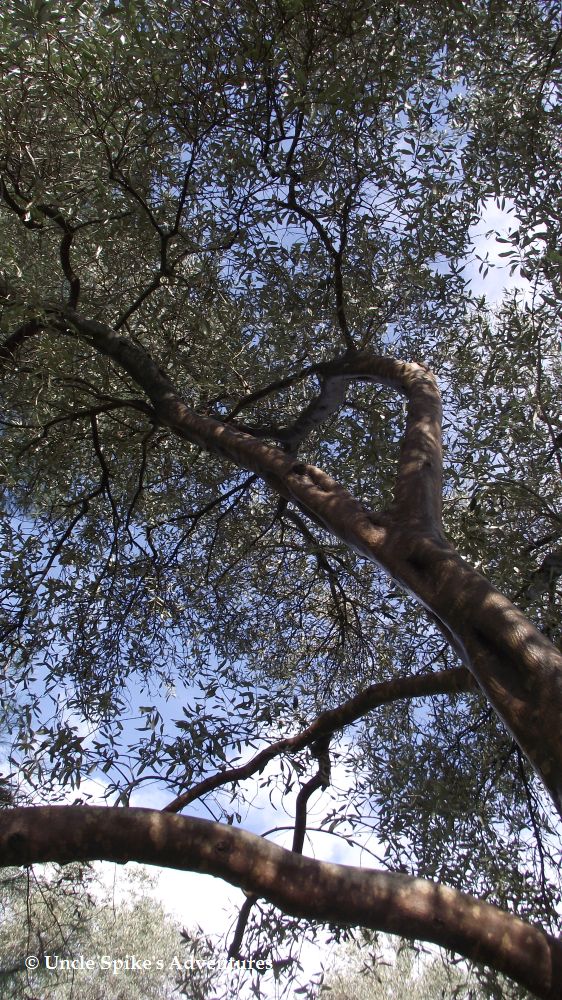 The commercial olive groves pretty much maintain a height of four metres (13 ft) which is good for fruit production, but also for manageability. With these huge trees, the locals beat them with very very long sticks, and them scrabble around in gangs of family members trying to pick up the olives. Working on my own all the time, I much prefer shorter, more manageable trees, where I can pick virtually 98% of the olives.

After five minutes walking around the tree, trying to decide where cuts should be made, it’s time to get out the trusty old bow saw, and for the larger cuts, the chainsaw. It doesn’t take long to reduce the height!

The key is to leave two healthy shoots growing in the right direction. If I just lop off a limb with no shoots, by next year it’ll be like a bush, having generated 30+ shoots at the cut point, so selective, careful planning and cutting is the name of the game. Sometimes I’ll rope down a branch to encourage it to grow at a different angle, or we use soda bottles half full of water tied on the branches – looks weird, but it works!

Of course, this sort of work generates even more work, with a great deal of cutting up then required. The smaller branches are used as compost, to feed goats, or to entertain the kid with a mega bonfire – olive trees burn very well, believe me!

At the end, there are piles of branch and trunk offcuts that’ll add to next winter’s log quota for the wood-burner.

This was just one area, with all five trees massively reduced in height. Whilst the resulting pruned trees are much smaller, within two years they should be producing at least three times the yield we have been getting from them… hopefully.

Thankfully I have just finished the pruning of about half of our fifty or so olives. Another job ticked off the list 🙂