So here we are again… This week, Uncle Spike, a small weakling of a blogging farmer in rural Turkey, has a very special Guest Writer lined up for you; Chris from the blog: Muscleheaded – The Voice of Unreason, of whom I’m a regular follower I’m happy to admit. In this post, we are introduced to the world of the Strongman – you Spikey’s said you liked variety! 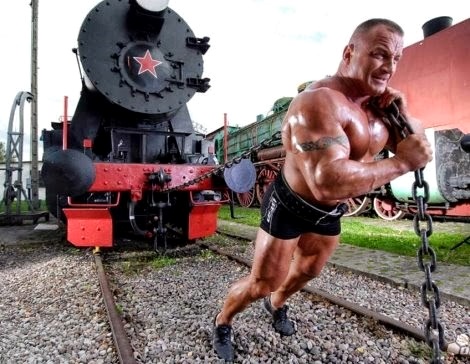 I have gotten several questions about the sport of Strongman…

…… what’s involved, what kinda weights and implements we use, etc.

And I thought it might be interesting if I took a stab at writing a post about it,

…… albeit from the perspective of an amateur, and now-retired (as for now, anyway) competitor.

Strongman competitions are held in most countries around the world….

The largest world body is called I.F.S.A. — International Federation of Strength Athletes — made up of national and multinational bodies — like it’s national professional organization in the US — the A.S.C (American Strongman) and it’s amateur body – N.A.S., (North American Strongman) of which I am a member.

Strongman competitors and fans are not your average sports fanatics.

Strongman – both amateur and professional, is about individual effort – about putting forth one’s best, in order to see just how far, just how strong, just how dedicated that individual competitor can be or go.

In Strongman, there’s no trash-talk, no bad mouthing — each and every competitor approaches the sport as an opportunity to compete, first and foremost, not against others, but against himself — his own weaknesses, his own limits.

Throughout the years, I have seen competitors rooting each other on, encouraging and advising each other, and never have I seen the kind of bad sportsmanship you see in other types of sporting events, like booing or grand standing.

In Strongman, performance and sportsmanship are what counts.

Just watch a Marius Pudzianowski or a Phil Phister — they’re right there cheering the other competitors on when they themselves are not competing. 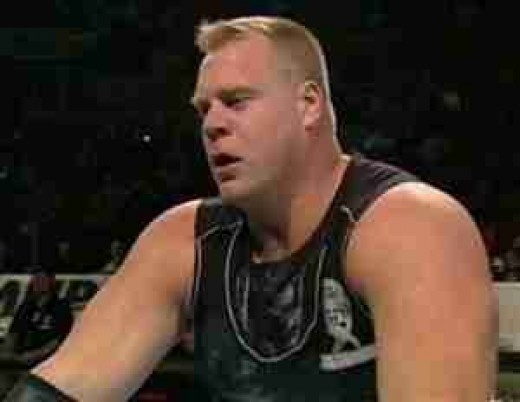 Most Strongman Professionals (and of course, amateurs) have ‘real day jobs’…. which helps keeps the sport on a level where the sport comes first — and money is secondary. Phil Phister (above) — who won World’s Strongest Man 2006, for instance, is a Fireman.

Training for Strongman is sometimes very difficult, since the range of implements used in events can be both challenging and diverse.

The ideal Strongman competition will throw a series of awkward tests at the athlete – requiring him to be strong, not only in the arms or legs, but in all parts of his body.

Many times, competitors won’t even know which implements they’ll be facing – the only thing they know for sure, is that they will be challenged from head to toe. Above is a pic of ASC athlete Jon Anderson carrying a 400 pound (182 kg) awkwardly shaped rock in a 100 foot (30m) timed event called the Stone Carry.

We will look at some of the various implements used in Strongman….. As you look at the pictures, I’d like you to notice the wide variety of different kinds of athletes that compete……

…..we have both men and women, old and young, of all sizes and backgrounds in the NAS. Here, for instance, above is 64 year old Odd Haugen on the Farmer’s Yoke (his name is pronounced Owed).

Many Strongman competitions are divided into weight classes — which means you don’t have to be a mass monster to compete — you just have to be strong.

He ended up coming in third in his weight class, out of 20 guys. He’s won since then.

And you never know who you’ll see at an event — no matter what level competition it might be. Above is three time World’s Strongest Man Magnus Ver Magnussen at ASC 2007.

And strong as death.

And you’d better be strong to lift, pull, or pull the implements we use in Strongman.

One of my favorite events is the truck pull. 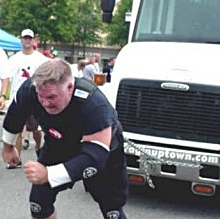 I love it…. with, or without the rope, or the harness, even.

It’s mostly legs — you get low and you just keep moving.

But then, sometimes, this event is done from a seated position, pulling the truck at the end of a rope towards you, hand over hand.

Then, it’s your back, your shoulders, your arms, AND your legs.

Another of my favorites is the deadlift.

In Strongman, you could find yourself deadlifting just about anything.

Including a Truck Axle complete with Truck Tires…….. or a CAR.

We have to be able handle just about anything the organizer wants to throw at us….

And if they got some huge tractor tires laying around, well…. you know what’s next.

The “chain pull” is an event that the fans enjoy a lot…..

The chain itself weighs over 700 pounds (318 kg)… it’s the kind of chain used on ships for anchors….

…. and the idea is to drag it across the parking lot in the fastest time.

Sometimes, there’s an anchor attached, too.

The form is important…. keeping the back in the natural arch, and the head back is key, as is keeping the chain close in to the body.

An event usually reserved for last is called the “Atlas Stones” — these are round stones weighing from 275 pounds (125 kg) upward — there are usually four or five stones — each of them increasing in weight.

The idea is to somehow get a hold of it, and lift it from the ground to a raised pedestal. 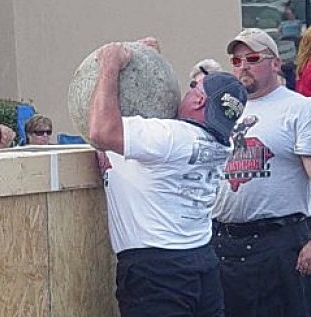 Legs, back, and arms all come into play here….

Being round, the stone has no natural places to grip or grab…

One must wrap his arms around it and hug it…..

…most of the time, competitors will use “sticky” to get a better hold on the stone.

Every time I do it, I get half-moon bruises on the insides of my forearms and thighs…

A taller competitor might have an advantage on this event, since the pedestals for the first coupla stones are pretty high. (but, then, on deadlifts, a shorter competitor has to lift a shorter range to lock out, so we figure it evens out…)

Overhead Lifts are another event that requires a total commitment of body and mind.

Some of the world’s strongest men come from Western Europe- especially the Baltic countries like Latvia, Estonia, and Lithuania — like IFSA Professional Zadrunas Savickas — who excels at the event.

There are a number of events I haven’t covered, including the Keg Toss, which involves throwing a 45 pound (20 kg) beer keg overhead — the Keg Lift, which is like the stones with kegs, and usually part of a larger keg course which includes the farmers walk and the keg overhead.

My intent is simply provoke some interest in the sport in you… either as a spectator or a competitor.

If you’d like to see the event schedule for a Strongman contest in your area – check out this site:  www.nastrongman.com

Hope to see you at an event soon!!!

Chris a 56 year old Amateur Masters Strongman competitor in the United States, and member of North American Strongman. Describing himself as a mature Southern powerlifter who likes to hear himself write. He is a veteran of the U.S. Navy, a graduate of Brown Institute, and currently compete in Masters Strongman.

He has two blogs, one called Muscleheaded, which features snarky humor, vintage pinups, and weirdos in the news are just a few of the things he likes, and he’s been known to sneak all kinds of things in there. And then there is the Musclehead Gym, his strength training blog.

8 thoughts on “Guest post: “Strongman” – by Chris, from Muscleheaded”