When we first acquired the land it was like a jungle. Not much had been done for years and the whole place was just an overgrown ‘natural’ mess. A few years of hard graft has certainly transformed the place, having created boundaries, built fences, a house, landscaped a garden, among a host of other changes.

We chopped a bunch of trees. Now we love our trees, don’t get me wrong, but to build a house you need space. But there was one old olive tree almost right where we planned to build. After some time considering our options, we adjusted the plans, deciding we could get away with leaving the old olive in situ.

“We’ll make a feature of it”

And a year or so after the build was more or less completed, I moved on to trying to make a feature of said tree. These are a few photographs taken along the way. It was not the most stunning of trees, but olive trees favour cutting back for the sake of regeneration, and whilst the visible tree was not that huge, the base stump told another story – I reckon it’s around 150 years old. That’s not old by the way for an olive tree, but it felt right to give the old boy a new lease of life.

The land levelling over the years had exposed the large base, so we decided to enclose it within a small round wall, and make a flower and sitting area – a garden feature, so to speak.

The first job was to create a level concrete base. Easier said that done with land that slopes off in two directions. Out came the ball of string and spirit-level…

A conduit pipe was embedded within the concrete base. Later on I ran an electrical supply from the house, through the conduit and up into the tree. We now have a couple of green lamps hanging in the old tree, switched from within the house on summer evenings. 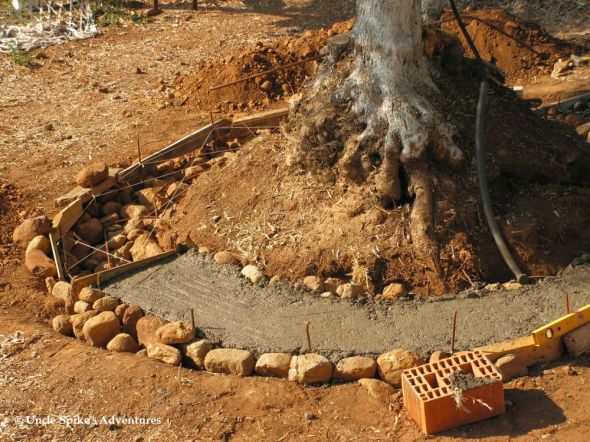 A solid wall, with a few drainage holes was then built. I then laid some drip pipes around the tree base, protecting them with flat stone.

The entire structure was then filled with fresh earth, small rocks, some sand and of course, goat poo. It was then left to settle for a year.

In the mountains there is no shortage of rock and stone, and I happened to have a couple of tonnes of natural local stone for wall facing still hanging around (as you do). So the final job was to add stone facing to the structure.

A couple of years on, and the ‘feature’ has now settled in. It’s now a great place for a cuppa; sat outside in the shade during summer – and a popular place for the amorous adventures of our chickens too.

18 thoughts on “The Old Olive Tree”