An earlier post, entitled Atatürk’s Mausoleum – Part One, was a summary of a recent visit to ‘Anıtkabir’ in Ankara, the capital city of Turkey, and the site of Atatürk’s mausoleum – the founder and first president of the Republic of Turkey.

If you didn’t catch that earlier post, it would make sense to check that out first, so you’ll know what these images are all about.

The Hall of Honour, where the sarcophagus is held, is pretty impressive. The building itself 57 x 41 metres (188 x 136 ft), with a height of 17 metres (56 ft). This next images show (although not brilliantly I’m afraid), the ornate ceilings of the hall.

This huge inscription is Atatürk’s last address to the army.
(English version below) 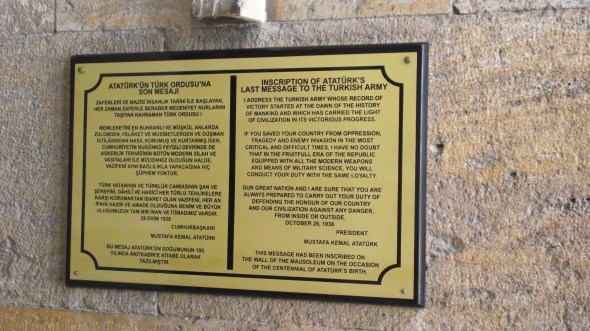 Below the Ceremonial Plaza and Hall of Honour, is a large museum all about, no surprise, the life and work of Mustafa Kemal Atatürk, as the leader of the Turkish War of Independence and the founder and first President of the Republic of Turkey.

Artefacts vary from photographs, Atatürk’s clothing and even the books he wrote, through to a whole host of military equipment and paraphernalia from the period. Then there are huge works of art, the cars he used and even a boat. It’s quite a comprehensive display all told.

The museum is well laid out, with many small rooms and alcoves containing polished glass display cabinets. There are also detailed battle scenes depicting the many struggles, complete with audio and visual effects – pretty good stuff too compared to some museums I’ve seen.

For me, like Tiananmen Square, the beauty lies in the sheer space of the Ceremonial Plaza. I can spend hours in places like that, just standing or sitting; watching the world and his family wander past. These next few images give you an idea of the scale of the place. 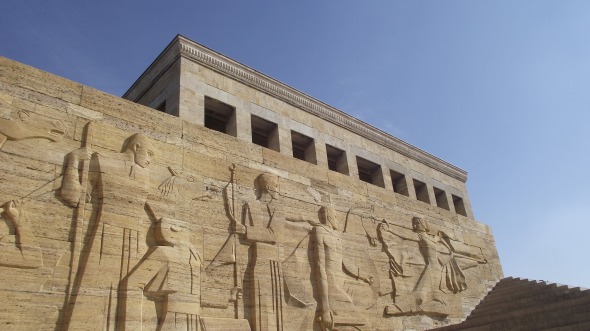 You walk to/from the mausoleum along what is called the Road of Lions. It is some 260 metres (850 ft) long, with 12 pairs of lions on each side. The five centimetre (2”) gap that separates the paving stones on the Road of Lions is supposed to slow visitors down as a mark of respect on their way to Atatürk’s tomb. Of course, for Cousin Spike Jnr, this just became a rather long game of hopscotch!

Wordless Wednesday ~ My Porsche (not) »
« Kumquats – Love these Babies