Star Wars Knickers Save The Day

Cousin Spike Jnr went off to school as normal this morning, all full of it and prepared to do battle in the world of classical joined-up writing. He might be just turning six, but his hand-writing has already well surpassed my legendary scrawl.

A couple of hours later I was swinging the pickaxe in the garden, moving plants and shrubs around during our ‘not hot’ season. I can’t really call it winter here, not when I read all about the Arctic conditions across the States right now, and the torrential storms afflicting Northern Europe.

Anyway, Aunty Spike called me, after having received a call from the school nurse (never a good start to any conversation). Thankfully she wasn’t lecturing so was able to take the call – telephone conversations in Turkish are not my strong point; still struggle face-to-face to be honest!

“There was a minor bus crash on the way to school”

No major injuries, a few banged heads, some cracked glass and a few tears. Thankfully that was all. Nothing else to report, so we both relaxed, Aunty Spike went off to a meeting and I attacked the next rose bed with added vigour.

Tonight when I met kiddo off the bus at a little after five o’clock, he was his usual self. I didn’t broach the ‘bus’ subject, but he soon told me all about it – he’s a boy after all… and this was exciting news to tell. 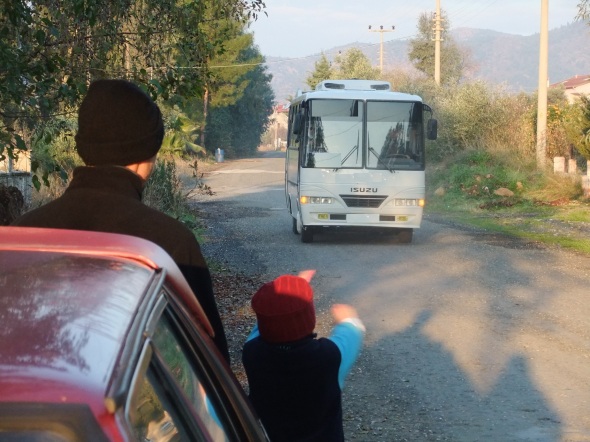 They had indeed had a small crash on the big mountain road which is still under construction, so no big surprise. Their bus had bumped into the back of another smaller school minibus (we dont have ‘special school buses’ like in the US, just normal 15 seater minibuses or like his one, a 25 seater midi-bus). The glass had cracked, but no other problems. He had hit his head on the seat in front, but was ok, and then they were a bit late for school as they had to wait for a replacement bus to be sent out from the school. No big deal.

He then showed me his ‘big scar’. Yeah right, not a scratch, not even a bump, a blemish, or a mark. He was lucky and I’m relieved of course, but I get the feeling he’d been milking this one all day, getting all the female sympathy his blue eyes and long lashes could muster I should imagine (son of the father and all that).

“Because I was wearing my new Star Wars knickers I got for New Years.
The force kept me safe!” 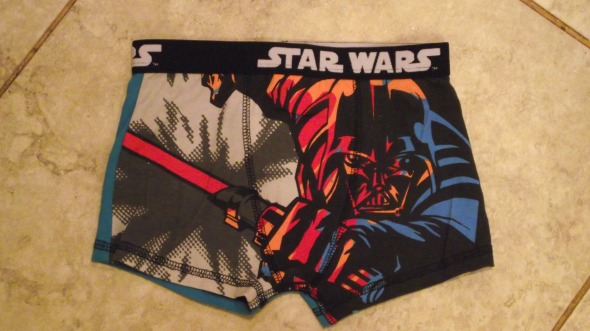 So there you have it. All is well, and young Padawan Spike can go on to fight more battles with his trusty light-sabre.

Now, you know when your mom used to tell you to wear clean knickers coz you might have an accident, she was right… but more importantly, one needs to make sure you are wearing the right knickers too; it can make all the difference apparantly!

33 thoughts on “Star Wars Knickers Save The Day”