I’m a fairly honest and decent sort of chap really. I don’t steal or cheat, and any lies I’ve told over the years have been small and of the white variety. Have I ever had a criminal record, no. But as a kid, was I ever a naughty boy, oh yes, regularly; I even got fired once.

I don’t know about you, but back when I was a lad, I was living in England. It was the late 1970’s and the internet, WAP technology, Nintendo, Baywatch, and even One Direction was unheard of. But we did have bicycles though! Ours only had 1, 2 or 3 gears, mind you, and weighed half a tonne; no multi-geared lightweight go-faster frames back then; not for normal folk anyway.

Pocket money was there to be earned, yes earned, not some god-given right, and at most it could buy one bag of sweets, or a chocolate bar or two a week. So we worked for our spendies…

We lived in a rural setting where there were just 5-6 houses within easy reach, so doing a ‘normal’ daily paper round, or paper route as you may know it, just wasn’t a viable option.

What we did have was the ‘weekly free newspaper’. If you are unfamiliar, well it was simply a free rag delivered once a week that contained local stories, but mostly it was cover to cover advertisements by local businesses, hence it was ‘free’ I guess.

Me and a couple of friends from school heard of some ‘positions’ coming up as available, so we went down to check it out, met the ‘boss’, a stern middle-aged dragon of a woman who was the local representative, or ‘routes organiser’. Somehow or other we managed to get ourselves ‘hired’. It was a Thursday publication, so the idea being that we all met Miss Dragon-Features once a week at a certain drop-off point, picked up our enormous bag of 300 papers and set off on our allotted route.

This we did, week in, week out. Yawn – it was tedious though. In the wind and the rain and even in the snow, those papers were printed and us muppets delivered them, all for what $5 a week?

After a few months the novelty had waned ever so slightly. Unlike some countries, paper delivery in the UK means actually putting the paper through the letterbox flap of the front door, so every house had to be actually visited, gates opened, driveways walked up and back, dogs avoided and grass not walked on or you’d be subjected to a torrent of abuse from the occupant all too often. As well as all that, the bag was heavy, the newspapers were completely devoid of any news, so 99% of householders couldn’t give a stuff. You just knew your efforts were at best just helping them light their coal fires, or line the bottom of some metal cage hanging in the kitchen to collect budgie poop.

One or two of us sometimes ‘missed off’ a few roads; those which were a pain, perhaps too hilly or sparsely populated. We started to dump some papers in the hedges. It was still semi-rural, so no end of hidy places became available. The omitted roads grew in number as the months passed, just enough to make the five bucks a week seem less like slave labour. 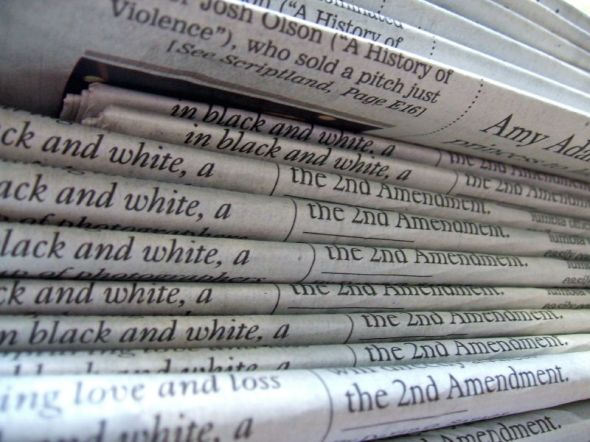 On and on this went, for almost a year I guess, until…

One day we met Miss Dragon-Features as usual, but she seemed extra grim, even more pug-faced than normal. She handed out the sacks of papers to all but two of us. Then she looked at us with black demonic eyes and with dare I say it, a touch of glee, she said:

Then she smiled. It might have just been gas. We weren’t convinced smiling was in her repertoire. Hmm, didn’t see that one coming. She obviously felt like milking the moment, as she continued her diatribe unabated as we stood affixed to the spot.

She had, she said, just the day before, been to visit an old friend (how nice, but who cares we thought). This friend lived on Waters Lane she said (oh crap, we knew what this meant). Her friend had asked Miss Dragon-Features what she was doing these days, and she had replied she was area representative for the free weekly newspaper. “What paper?” the friend had responded, having not seen a copy for the past few months at least… our fate had been sealed from that moment on.

Of course we admitted nothing, well not beyond the missing out of a few odd houses. She wasn’t convinced and our conviction was upheld and we shown the door. As a parting shot, she happened to mention that the colour stripes that almost looked like a bar-code that adorned the side seam of every paper was actually applied ‘per bundle’, so they could tell which ‘route’ a paper was from….

I’m trying to think back at how long it took us to ‘dispose of the evidence’. We had to locate and clean out our dumping ground before Miss Dragon-Features, or any of her minions stumbled across it. We did the deed and laid low. But we lived in fear of a ‘visit’ from Miss Dragon-Features for months after, in fear of how many ‘five bucks’ she would demand back for non-delivery of the so-called newspaper.

Lesson learned. I was a good boy after that. Promise!