Guess Who Got Grounded?

Yep, you got it, Cousin Spike Jnr was grounded for a while… On the whole he’s a good kid. He’s smart for a 5 year old, quite intelligent, generally polite, knows how to behave and does his chores ok, and he is hard working at school by all accounts, although he ‘drifts’ at times (sounds familiar). However, he is also my kid, and therefore a ‘mini-me’ in many ways. Personally I think it’s all part and parcel of a curse my mom put on me as payback for all the hideous childhood years she had to endure during the 1970’s.

Anyway, back to our small person. As mentioned the other day in Quite The Budding Artist and the one about My First Blog Post, Cousin Spike Jnr has become somewhat of an artist as he discovers his creative genes.

On Sunday we was making pictures of monsters and things like that, as you do… All was well, he played happily, homework all finished by Saturday night, whilst us growed-ups got on with some work in the other room.

Later in the afternoon, we were all outside in the sun. It was not hot, but a thin jacket was sufficient as long as you kept in the sun (cold weather is a relative thing I guess – it was still 16C, 60F). All of a sudden I noticed his jim-jams looked odd (he lives and dies in them on Sunday’s… coz it’s his “day off” as he explains.

I called him over

“Why is there a hole in you jim-jams mister?
Did you fall over or something?”

No reply.
I had a closer look and saw it wasn’t a tear in the fabric,
it was a ‘hole’, and quite a uniform shaped hole at that.

“What’s this?” I asked knowingly

“I wanted a monster for my picture, so I cut one out”

He had indeed. He had quite neatly cut out one of the monster figures from the front of his pyjama trousers!!  Oh, he is SO like a little me! 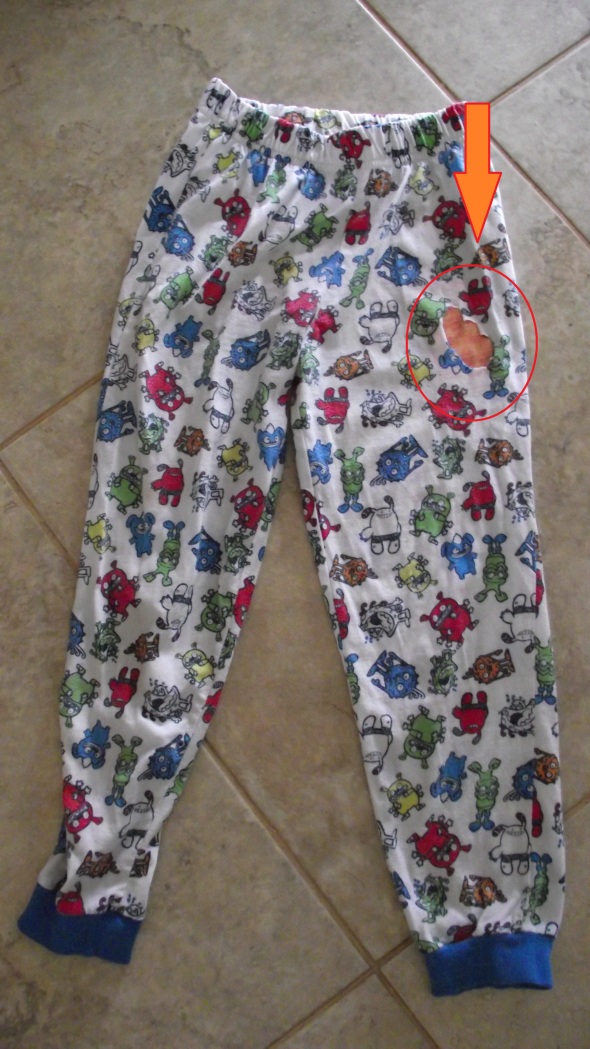 As a result he was grounded. Or to translate that into his language; no more Angry Birds Star II for the rest of the day (he’s already had an hour anyway). Off he stomped indoors in a huff. He surfaced a while later, a bit sheepish; even bordering on apologetic. Looks like his lesson was learned anyway 🙂 well, for this week at least. Having been the forerunner to his antics, I just know this is just the start.

* UPDATE *  –  For those concerned about his punishment for using his creativity… just remember that we know this lad, we have seen him day in, day out, and both we AND he know the difference between creative mischief and misbehaviour. He already knew it was wrong and we had to reinforce that.

Afterwards he and Aunty Spike went off and made a 3-D Angry Birds scene together in place of yet more time with face stuck in the tablet screen (which we withdrew for the remainder of that day). So, harsh, I don’t think so, not when, as his parents, we know pretty well how to motivate him, and that includes encouragement and punishment – there has to be boundaries in my mind.

Did make me laugh though; and cringe at what I must have put my own parents through! (and believe me, it was pretty bad)…

35 thoughts on “Guess Who Got Grounded?”