Nigel, Bonzo And One Foxy Lady

It was 03:22 one night when Uncle Spike’s brain became fully concious to a racket going on outside our bedroom window. I had been vaguely aware of Bonzo, our farm dog, going nuts for a while, barking away outside his house under the big olive tree. My tired brain doesn’t always ‘get it’, and to hear Bonzo ‘going off’ is no rarity to be honest – he’s nocturnal really, a night worker in fact according to the work roster tacked to the wall of his kennel.

Anyway, I ventured outside on to the main large balcony, a 40m2 (430 sq ft) covered terrace that spans the front of the house, overlooking the main orchard. I requested Bonzo to “cease and desist!”. He didn’t, but normally he does when asked nicely (yeah, as if!)… so I knew something was up. 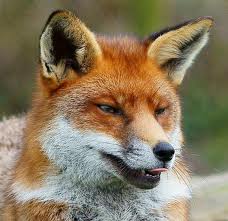 Then, from the corner of my eye, I spotted a rather large vixen (girlie fox), with a great bushy tail, cross the yard at a fair pace. She had been sniffing around one of the chook huts, but thankfully she hadn’t been able to grab a snack this time. A couple of years ago we lost some 25 of our chickens to a ‘skulk’ of hungry foxes, but looks like they are breeding again and back in action – yay, sleepless nights here we come, especially next spring when the kits (cubs) will need feeding.

The good news is that Nigel, the rooster who was a star in a similar blog post was ok – you see, he lives in the clementine tree next to where most of the other chickens live at night, and per chance, Mrs Foxy didn’t swipe him – maybe he is just too old for her liking? You see, foxes are clever old sods, they know exactly the reach of Bonzo’s chain and will even swipe a chicken out of a tree just 1 metre away from him – they are scared of nothing, except me hurling rocks at them or a neighbouring farmer and his 12 bore!

That night was cool, so Uncle Spike was wrapped in a dressing gown for the balcony event – not so during summer, when I am famous for Nocturnal Garden Adventures… In My Boxers.

5 thoughts on “Nigel, Bonzo And One Foxy Lady”