After more than 2 months of visitors (literally one set after another, sometimes 3 lots at once), we finally had the house to ourselves this weekend (plus Spike Jnr of course).

So to celebrate our new found freedom, Aunty Spike and I set to work together this Saturday morning on processing some of our ‘pommies’ – our Pomegranate harvest.

The bulk of the crop has been newspaper wrapped and put into storage in the garage / farm depot. They should stay fresh for a couple of months that way.

Most of the softer, overripe and ‘opening’ fruit was used up today.

We ‘peeled’, separated or whatever you want to call the process, some 10kg (22 lbs) of poms. That takes time, but sat at the big kitchen table together, catching up on tv series we’ve unable to watch due to visitors, it seemed an ideal chore to share whilst watching a couple of episodes of Elementary this morning. 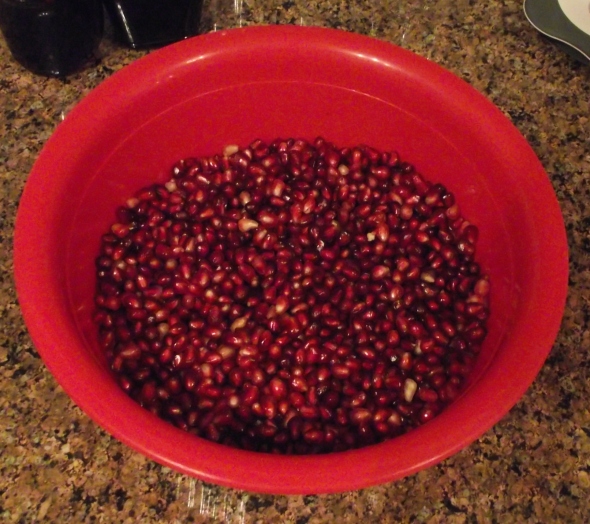 JUST A FEW OF THE POMEGRANATE SEEDS

(UPDATE) Some readers have been asking how best to ‘peel’ a pomegranate… well here’s how we do it. there are many methods, but this is the easiest I think.

Best trick to peeling… use a sharp knife and cut just into the peel, say no more than 1mm (1/32″) deep (you dont want to pierce any of the seeds), score it like that in 5cm (2″) segments (so maybe 4-8 cuts). Leave in a large bowl of cool water for 10 minutes. The husk will start to open then. If the fruit is already fully ripe and starting to split open, ignore this step and move on to the next…

Then grab and break the fruit open (in the water) – break it into 8-10 chunks. Leave in the water for another 10 minutes. Then it’ll be so much easier to separate the seeds out from the husk. The seeds will sink, and the husk/rind/pith will float, so easy to separate them.
Throw away the crap and put the seeds into a posh bowl. Then sit in front of the telly and scoff the lot (dont wear a white shirt though in case a seed pops out – lovely stains). Any left? Just leave the bowl in the fridge, and they’ll last for days. We have a constant bowl in there…
You’ll never get a mouth ulcer again by the way – brilliant preventative medicine

From the seeds we made a couple of pots of jam. No preservatives as usual; we never use anything beyond sugar and our own fresh lemon juice in place of packet commercial pectin.

We then used our big fat Kenwood liquidiser to mulch the main large bucket full of seeds. Drained through a large metal colander, and then strained by hand through some muslin cloth, we ended up with a few fine litres of fresh juice.

Every winter we freeze down some 200 litres (420 US pints) of clementine and orange juice for daily use throughout the year), so we do have a large extra strong manual fruit juicer which we use for that job. But even though it is plenty strong enough for pomegranate juicing, we still prefer to extract using the above method. I reckon the yield to be at least 50% higher that way, as we have virtually zero waste (and the chickens love the left over dry pulp and seeds anyway).

Some juice was poured into glasses which we then gulped down – lovely. And some was saved for later 🙂

The rest was used to make pomegranate molasses, which is very much a delicacy here for use on salads – part of our year round daily diet. The ratio is just 1:4 so you can image how many seeds it takes to make. For example, 1 whole bucket of seeds makes 4 litres of fresh juice (that’s 8.5 US pints), but that will produce just 1 litre (2.11 US pints) of molasses – but oh, so worth it !! 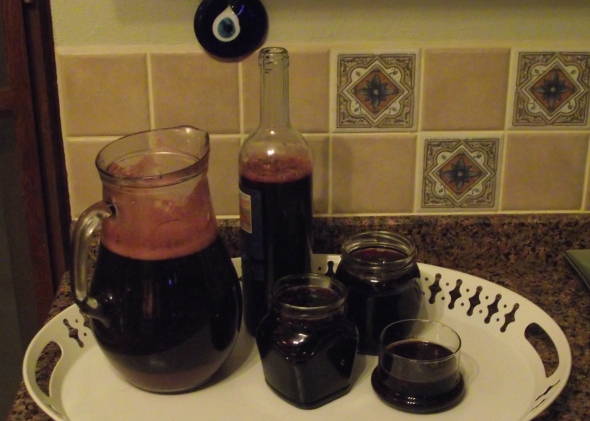